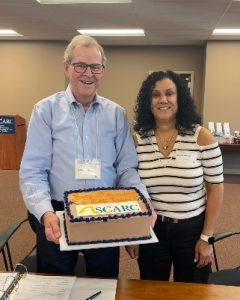 SCARC President and Chief Executive Officer Dr. Richard Lecher celebrated his 50th Anniversary at SCARC as of August 15, 2022.  He began his tenure with SCARC in 1972, and has led the growth of our organization over the many years of our history.  SCARC was founded in 1957, and was administered by numerous founding volunteers until Dr. Lecher’s employment in 1972.  Celebrating the event, the SCARC Board of Trustees Chairwoman Darlene Blandina and board members enjoyed a cake to celebrate the milestone.