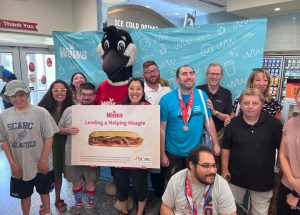 Several SCARC Special Olympians attended the grand opening for VIPs at the WAWA store in Augusta on July 13.  They were invited by Bill Ott, area manager of WAWA, to attend the event with other SCARC personnel.  WAWA is a generous supporter of SCARC services, and the SCARC Foundation, as well as New Jersey Special Olympics.  WAWA has a distinguished history of employing workers with disabilities, and working with Arc chapters throughout New Jersey, including SCARC in Sussex County.  The Augusta based WAWA is the first of three planned stores in Sussex County.  The location was previously occupied by the Chatterbox Restaurant.  Both the previous owner of Chatterbox, Don Hall, and the present WAWA area manager, Bill Ott, are members of the SCARC Foundation board of trustees.